A Different Perspective On Rising Rates

With so much talk on rates lately, this is a good time for me to put some real perspective into the mix.

Recent weeks have seen fixed rates go up, but this is nothing to get spooked over! This rate increase is normal within the rate cycle, and this doesn’t really feel any different than before.

Before reading this article and the points I will make on interest rates, please remember one crucial point. The media always creates unnecessary fervor when rates change. I could go to every newspaper and find articles that sensationalize any slight changes to interest rates. Why? To bring in readers! People always read something if they feel it has a direct effect on them, especially their finances! Now, I’m not a conspiracy theorist or against the media, not in the slightest. But we all have to remember why they put something to print, and to be critical of it.

Furthermore, this is where I throw in my own disclaimer. Any predictions made by economists, myself, or anyone for that matter, can be considered merely opinions. While I’m confident in my analysis, I don’t have a crystal ball, and the points I make below are my opinion on the matter.

Why Are We Trying To Time Things?

In my time as a banker and broker, I see the same patters from clients over and over. They rush to lock in whenever fixed rates increase slightly because they get scared by an article they read. This sort of reactive behavior can be detrimental to their financial health, for a few reasons.

Generally, once rates have increased, it’s too late to lock into what were the lowest rates. It’s like selling a stock after it’s had a huge drop, or buying a stock after it’s already experienced it’s high. We’re always told by investment advisors to not attempt to time our buys and sells, but rather follow a plan and stick to it right from the beginning. I would pose the same advice when it comes to your mortgage.

The Actual Numbers, And How It Affects You

When we look at the nitty gritty numbers, most of our variable rates are around 1% to 1.5% lower than fixed rates. This means that the BoC rate has to increase 4 to 6 times before the variable rate is even equivalent to the lock in fixed rate.

Also, remember that both fixed and variable rates usually only stay at their highs for 1, maybe 2 years. They go up, but they always come back down. So, people that stick to variable rates enjoy a lot of interest savings, both before and after the high of the variable rate.

When I’m on the phone with a client, and we’re talking about the difference between fixed and variable, much of the conversation is not on what we think is going to happen, but rather the client situation itself. Imagine it:

Client – “Oh. I see. So maybe I don’t care as much if the media is scaring me into locking in. Maybe saving $500 per month for now is more important than us trying to predict the future”.

Simply put, the material savings becomes far more important than the threat that rates might go up in the future. Savings now is a tangible thing, while future rate increases are unpredictable and do not affect the client in the here and now.

BoC – Talks The Talk, Too Much!

Now, onto the news and BoC announcements that we keep seeing. This past week, the BoC said, yet again, that they will be raising interest rates in 2022. But instead of the hike coming in the later half of 2022, they will do it sometime in the spring.

Here’s what I hear, though:

“We are going to eventually raise interest rates, due to inflation. We aren’t going to do it now because the situation is nothing really to fret over. We are just telling you we might do it earlier than previously expected, depending on what happens moving forward. We don’t know when, but we just want to say, we might do it. We might not. We might just hold off. We don’t know. Just be warned. At some point they will go up. We also don’t know by how much. Maybe .25%. Maybe .5%. Not sure. It all depends”.

If you sensed some sarcasm in the previous paragraph, you were correct. Is this sort of announcement even necessary? Does the BoC just like to hear themselves talk? If they’re actually overly concerned about inflation, they would have just raised the rate. These constant announcements just create unnecessary nervousness. No announcement at all would have been more appropriate.

Does History Mean Anything? Of Course!

Now, onto my prediction of where interest rates are going, for the short and long term. When we look at history since the year 2000 or so, we are in a declining interest rate environment. Picture a rollercoaster, or I’ll even do it for you: 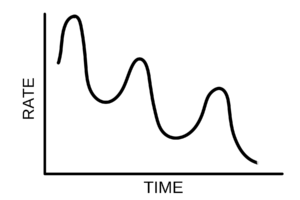 Notice a few important points. The previous highs are always higher than the current highs, and the previous lows are also always always higher than the current lows. So even though there are ups and downs, the ride is generally moving downward over time. Note – this picture is not a true reflection of the timing or rates themselves, but rather it’s a conceptualization of the point I am trying to make.

Also realize that when rates are low, they stay lower for longer periods of time than the highs. So maybe imagine the graph looks more like this, instead: 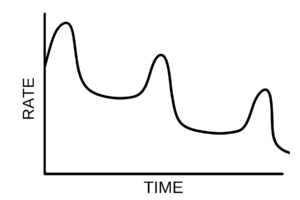 Uncertainty and Events Bring Rates Down

We live in a very uncertain world. Pandemics, wars, resource shortages, and environmental disasters are just a few things that affect our rates, and generally only in one direction. Down! So when any major event occurs, we will see governments around the world lower rates to encourage spending and economic activity. It happened throughout the last two decades with 9-11, Sars, the Financial crisis, and most recently, Covid. Is the uncertainty over? That is a question for you to think about, but I certainly think not. I don’t want to scare you, I just want us all to remember that stuff happens, and when stuff happens, rates drop.

So, Do You Really Want To Lock In? Should You Go for an Early Mortgage Renewal?

So, do you want to lock in at 2.4%? If history shows that rates will most likely come back down to it’s previous low, and maybe even lower, we will see rates come back down to 1.4% and perhaps even lower depending on external forces. Should you considering an early mortgage renewal? Talk to a mortgage broker in Vancouver and stop worrying.

Did you know there are some countries in the world experiencing negative interest rates? Kind of a mind bender, huh? If you have money in the bank, you’ll pay them interest, and if you have a mortgage, the bank will pay you interest, or the interest will be closer to 0%. The BoC and banks will pay you to own that asset over time. Negative interest rates are used to spur on borrowing and thus, increase economic activity. This might not happen for a long time, but I do believe it will eventually be a reality, or we will live close to 0% rates for quite some time.

Thank you for reading. I hope I’ve brought you some perspective and clarity. If you have any questions about rates or your mortgage, feel free to call us at Olympic Mortgage, we are always happy to hear from you.

Signing off for now,

Thinking of investing in real estate?